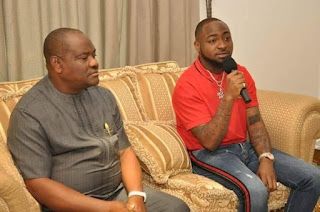 By: Adewale Adetoyese
Hiphop star, David Adeleke popularly called Davido who is a relative of the Peoples Democratic Party’s gubernatorial candidate, Senator Ademola Adeleke has embarked on a sole campaign for his uncle.
EyewitnessReporters gathered that Davido on his visit to the Rivers State Governor, Nyesom Wike on Friday urged him to support Senator Adeleke.
Davido who was in the Rivers’ Government House to work on a collaboration with the government on a youth development project briefly urged the Governor to assist his uncle’s gubernatorial ambition.
In his reaction, Governor Wike assured Davido that he will support Senator Adeleke to emerge victorious during the September 22 Election, adding that the entire PDP structure will work for the victory of Senator Adeleke.