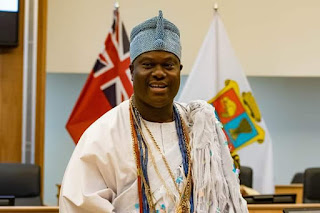 During a press conference at the foremost African traditional ruler’s Ile Oodua palace, Ile Ife, Osun State, the Special Adviser to the monarch on Youth Development and Wealth Creation, Mr. Olamide Awosunle, explained that the Ooni has since his emergence been enriching African youths through countless laudable activities.

He said, “This initiative is another developmental idea of His Imperial Majesty to meaningfully engage the youths, contribute to government’s fight against unemployment and massive wealth creation.

“In the past years we have empowered thousands of young and old through various empowerment programs of foremost Monarch. Through RAYEES, about fifty enterprising and innovative youths will be empowered and gain international best practices to run outstanding businesses.

‘”RAYEES’ maiden edition is organized in partnership with Henley Business School in United Kingdom and supported by world renowned organizations like Oracle, Afrinolly, Intertalent and top Federal Government agencies like the National Directorate of Employment (NDE) among others. The selection process of participants will be announced shortly.”

Similarly, the Chief Executive Officer, Ooni of Ife Global Outreach (OIGO) Dr. Ayobami Oyedare, explained that the motive behind the initiative is to create a new digital technological pathway, unlock the hidden creative treasures and untold trajectories of African youths through various lenses, energies and strands.

While he stressed that other initiatives include the Royal African Farm (RAF), Royal African Music (RAM), Royal African Medical Outreach and the Royal African Tech Incubation Culture (RATIC) advocating for the transformational entrepreneurship jobs creation mission, Dr. Ayobami emphasized that RAYEES is a unique initiative through which young several young Nigerian Entrepreneurs will be teach and mentored both in Nigeria and the United Kingdom by exceptional professionals and inventors while they will also be made to visit monumental sites like the UK Parliament, Buckingham Palace, Tower of London and the London Eye among others.

Dr. Ayobami who was flanked by prominent youth entrepreneurs including those in the booming entertainment industry noted that, “Africa has the required resources and manpower to fulfill its mandate of building a stable and economically flourishing society for its young generations.

“The Royal African Young Emerging Entrepreneurs Summit (RAYEES) maiden edition is being fully launched in November in partnership with the Henley Business School in the United Kingdom. The selection process will be announced shortly which will provide space for the most brilliant minds to engaging global and renowned successful entrepreneurs.

“To achieve these, His Imperial Majesty is working in collaboration with some of the well dedicated young influential cultural, creative, tech and digital transformation icons who paid him a courtesy visits at the Royal Court of the Kingdom of Ife so as to mutually build a contemporary life-tube catalyst for wealth creation and  limitless employment space across the continent.”

While addressing newsmen, a prominent British born Nigerian actor, Mr. Wale Ojo, noted that Nigerians must as a matter of fact invest and explore the non-oil sector of the economy to be able to empower its teeming youths for economic prosperity.

“The international filmmaker, who won the award for Best Actor at the 2012 Nigeria Entertainment Awards, explained that celebrities and young entrepreneurs globally will be involved in order to motivate the industrious youths and tell them that nothing is impossible.” Ojo noted.

In a like reaction, a top Nigerian born Afrobeats events promoter based in the United Kingdom, Junior Adeosun, popularly called Smade, expressed his heartfelt joy to be part of the initiate, pledging to support it with his influence and potentials as a youth entrepreneur.