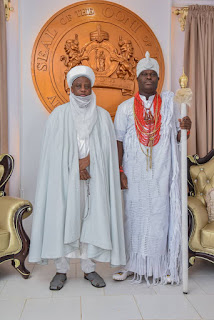 Adewale Adetoyese
The Arole Oodua & Ooni of Ife, Ooni Adeyeye Enitan Ogunwusi, Ojaja II on Tuesday played host to the Sultan of Sokoto, Alhaji Sa’ad Abubakar, traditional rulers across the six South West region of the country, the Mayor of Brampton (Canada) and other dignitaries on Tuesday during the unveiling ceremony of an empowerment project initiated and sponsored by the prominent oil magnate, Mr. Jack-Rich Tein Jnr.

While addressing the gathering, Ooni Ogunwusi expressed his belief that project is capable fast tracking an all-round development in the Region, calling on traditional rulers to support the initiative.

“The Jack-Rich’s BELEMAOIL Producing Limited is the only indigenous company in the country’s oil sector with a very high profile of Corporate Social Responsibility.

“He and his family are renowned for helping others especially the poor and other vulnerable members of the society. This South-West (Oduduwa States Initiative) will benefit our subjects in the areas of education, infrastructure and more.” The Ooni noted.

While unveiling the project titled ‘South-West Nigeria Project’, Mr. Jack-Rich explained that the project is designed to empower its beneficiaries in the areas of Women and Youth development as well as the issuance of scholarship opportunities for the less privilege children in the South-West.

Also, it shall include the construction of several infrastructural projects like roads and water projects across the region.

“We have not come to showcase wealth but love, we are aware of the economic and social situation across the country and we can’t afford to watch without doing our best.

“We keep multiplying in this country every day but we are not making use of the population to improve the country’s productivity, this is the reason behind the rising cases of insecurity which we must carefully examine.

“This project is designed to transfer wealth to youth Nigerians and women towards making them realize their dreams, and we thank our father the Ooni of Ife and all traditional rulers across the region here present for their presence and show of solidarity.” Mr Jack-Rich noted.

In his words of appreciation, the Ayangbunrin of Ikorodu, Lagos State, Oba Kabiru Adewale Shotobi, thanked the Jack-Rich family for counting the Southwest region worthy of such lofty project, promising that it will get the needed support for a successful execution.

In the same vein, the Ajero of Ijero, Ekiti State, Oba Joseph Adewole, described Jack-Rich as a detribalized Nigerian who is interested in the development of the country, adding that such attribute should be emulated by other privileged members of the society.

Sultan Muhammadu Sa’ad Abubakar of Sokoto  who missed the event due to delayed flight arrived the Ooni’s at about 10:35pm and ushered into inner chamber of the palace  held private discussions with the Ooni only joined by Mr Jack Rich and his wife. Both kings later moved to the banquet hall for a dinner where Sultan gave his speech.

The Sultan expressed his delight for making it to Ile-Ife despite the delay, saying his love for the Ooni motivated his determination to make the trip which he found so important and inevitable.

“By my calculation,I had hoped to be in Ife by 2:00 pm to honour my dear brother the Ooni of Ife and other Yoruba kings for the launching of South west empowerment project by the Jack Rich Foundation. But God is the ultimate decider as the weather in Akure and Ibadan delayed and had to route through Lagos from Abuja and from Lagos to Ife, it took me five and half hours to arrived Ife.

“If it’s possible I would have driven from Sokoto to Ife to show our love that we are one in this country. We are brothers and sisters living in different regions of the world.

“I made up my mind that no matter what it takes; I have to be in Ife to be with my brother Ooni Adeyeye Enitan Ogunwusi, Ojaja 11, Ooni of Ife who is doing a lot for the unity, peace and progress of this country to celebrate with him on the project launched today by the Tien Jack Rich.

“As for Jack Rich, I’m not surprised because that is what he(Jack Rich) normally does. He has done the same in North and now doing it in the Southwest starting from the source Ile-fe.

“The essence of our living is to bless the poor and the vulnerables which Jack Rich is doing and I know as he continues doing that; God will keeps blessing him.

“I have utmost belief that we would be here together in no distant time to commission it for the benefit and use of mankind.” Sultan said.

Rev father Ejike Mbaka of the Adoration Ministry based in Enugu who also had a similar delayed flight experience like the Sultan arrived the Ooni’s palace received by Mr Jack Rich and the Ooni’s Director of media, Comrade Moses Olafare who ushered him to meet the Ooni for a private meeting.

Earlier, the Lord Mayor of the city of Brampton in Canada, Mr Patrick Brown had described Ooni Ogunwusi as a special gift to the humanity, Africa is blessed to have such a dynamic visionary leader as a foremost king.

Mayor Brown who is on a 3-day working visit to Nigeria said this while making his speech at the palace of the Ooni during a courtesy visit to the Spiritual head of the Yoruba race worldwide. Mr Brown said his encounter with the Ooni has educated him better about Nigeria.

“Your majesty, you came to Canada and visited us in Brampton and you proclaimed Brampton as a city of love and Canadian city of the Africans. We promised to reciprocate the visit and we are here today in your palace”

“You are indeed a special gift to the humanity and Africa is so blessed to have such a dynamic visionary leader like as a foremost king. I am really feeling at home here.

We have seen this a tourist hub, we will look at business opportunities in tourism and in oder areas like agriculture, mining, healthcare and renewable energy and ultimately, we are going to really strengthen cultural relations between Brampton and Nigeria.” Mayor Brown said.