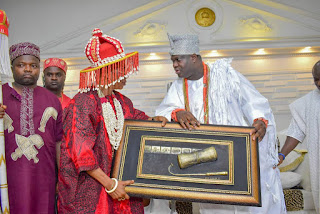 Adewale Adetoyese
The Arole Oodua & Ooni of Ife, Ooni Adeyeye Enitan Ogunwusi Ojaja II on Friday played host to His Royal Highness, Igwe Cyprian Mmaduabuchi Nevobasi, Ezeani III of Mmaku, Enugu State and other prominent Igbo leaders, who were at his Ile-Oodua palace, Ile Ife in the State of Osun on a royal homage.

NIGERIAN MAN IN LONDON LAMENTS OVER TOO MUCH CHURCHES

While addressing the Igbo monarch and his entourage, Ooni Ogunwusi described the Yoruba people of South Western part of Nigeria and their Igbo counterpart in the South East, as two inseparable African races who if well united as a family and with other tribes would for a formidable block as a catalyst towards building a unified Nigerian nation and the continent of Africa. 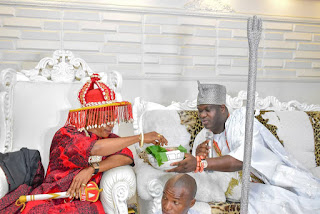 Ooni Ogunwusi said, “We need to cement our togetherness in this country because without the coming together of the Igbo and the Yoruba natives, it will be very difficult for Nigeria and the entire continent of Africa to progress. We are the real embodiment of the black people and the continent of Africa is looking forward to us.

“Handshake across the Niger like this is very important because we belong to the same family, so we should not separate ourselves the more. Let us look into things that bind us together like our rich cultures and traditions.

“We want to tell you today that we are now directly associating from the Kingdom of Ife to the entire Mmakun Kingdom in Igboland and Your Royal Highness have cemented that good relationship with this visit.

“Once again, I appreciate your philanthropic and leadership works especially towards the poor, oppressed and the downtrodden in Enugu and beyond, since you ascended the throne of your forebears some 20 years ago. I am proud to associate with you after hearing so much about you and I am so happy that we eventually met.

Earlier in his address, Igwe Cyprian Mmadubuchi who described the Ooni as a symbol of unity explained that he was thrilled by his navigation across Nigeria, provision of veritable road map for social integration, cultural inter-face, engagements and healing wounds.

“Your Imperial Majesty the Ooni, I commend your courage and candour for championing this strategic initiative on behalf of other traditional rulers. As I earlier said is  because as custodian of tradition and culture of the people, we are expected to be in the vanguard of ensuring national unity and cohesion in the country”.
Igwe Cyprian stressed that,

“I am loyal to your Imperial Majesty and I am here to assure you that you have found your missing ribs in the South East. I have seen with my eyes that you are a moving train, you have proven to our nation that you are a great leader we can trust and we are following you.

“Infact, If we Africans were Catholic, you are the black Pope.”
The Igbo monarch added

Similarly, Alaagba of Aagba in the State of Osun, Oba Rufus Ogunwole who was instrumental to the Igwe’s visit to Ile Ife, expressed his heartfelt joy over the history making day. He recalled that he secured Ooni’s permission to visit the Igwe when he was invited to visit the Enugu community in 2017, after which the relationship has been so cordial.

The event also witnessed various traditional performances from the Igbo dancers and their Yoruba counterparts as well as drummers among others. Thereafter, the Ooni offered prayers with the breaking of kola nuts and bitter colas which he said were first discovered in Ile-Ife.

NIGERIAN MAN IN LONDON LAMENTS OVER TOO MUCH CHURCHES