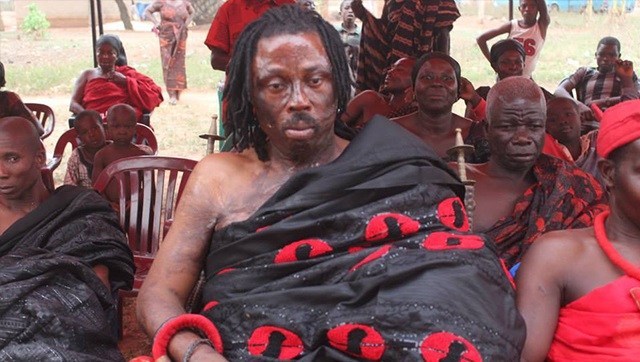 Abiodun Adeshina
It was a combination of herbalism and evangelism recently in a Ghanaian Church, when a prominent herbalist, identified as Kwaku Bonsam stormed it with his colleagues (herbalists) to retrieve his charm from the presiding pastor.

Eyewitnessreporters learnt that the Juju man who recently claimed during an interview that he has pastor-clients across the African continent, was seen in a video clip recorded by a member of church, disrupting activities in the church while telling the pastor to return the Juju he collected from him.

Kwaku Bonsam was heard saying “I told you to be patient” but it was not certain if he was speaking directly with the pastor, who was totally confounded by the unexpected move of the herbalist.

It was however not clear if the herbalist was able to retrieve his charm as it was not contained in the video.

There was confusion within the premises of the Ede Muslim Hospital, Ede, Osun State on Friday night 26th of June,...

I should be incapable of drawing a single stroke at the present moment; and yet I feel that I never...

The political future of the suspended Chairman of the All Progressives Congress, Mr. Adams Oshiomhole remains uncertain as the Court...