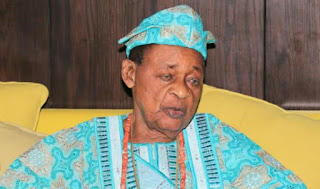 Ojo Akinsola
Alaafin of Oyo, Oba Lamidi Adeyemi on Monday installed the Fuji maestro, Wasiu Ayinde as the Mayegun of Yorubaland, maintaining that Yoruba kings and chiefs who indulge in clubbing, smoking, drinking and other untoward behaviour are not worthy of honour and any respect.

Femi Otedola : Finally I understood the meaning of true happiness.

Eyewitnessreporters learnt that Oba Adeyemi said this while reacting to social media reports credited to him as saying that after Wasiu’s coronation, he was not expected to prostrate before some kings in the land, the Alaafin said, “I did not mean that he should disrespect the royal fathers.

“He understands the culture and I am not saying that he should disrespect the culture. But kings who go about clubbing and drinking do not deserve any respect.”

On why the musician was chosen for the title,  the oba said it was time Yoruba people honoured those who had distinguished themselves in their callings.

He said gone were the days when Yoruba people were silent about the exploits of their own while they were being honoured in other areas.

He made reference to the likes of IK Dairo and  Haruna Ishola who died without being properly honoured.

Oba Adeyemi said, “As we all know, there are three tiers of government. We have the executive, the judiciary and the legislature. The media is regarded as the fourth estate of the realm, and musicians are a vital part of the media.

“Through music, some of them criticised government’s excesses. A king who wants progress for his people should listen to good words of music that are deliberately picked to correct societal problems. I looked round and acknowledged the efforts of some of our musicians who are not just singing for the sake of it.

“For a long time, I have been documenting some of the works of our good musicians in Yorubaland. IK Dairo of blessed memory was honoured in the United Kingdom many years ago. Then, Sunny Ade was discovered. They called him King of Juju music. What we have done is to discover our own talents. The music of Wasiu is philosophical. It is time we honoured our own.

“I did not mean that Wasiu will not respect our culture after being installed. He will honour our kings but will not prostrate before kings who are ignoble. A king should not be drinking (alcohol) at clubs and in public places, and a king should not smoke.

“We have been on the issue of the  Mayegun for the past 11 years. Today, the Mayegun has been installed. His duty is to ensure that things go well and right and excesses should be addressed.

Wasiu said his installation meant additional responsibility for him.

He said, “I give thanks to God Almighty for deeming me fit. I thank Kabiyesi Alaafin and all our royal fathers for supporting me on this occasion. The responsibility that I am given is about the unity of Yoruba.

“Eleven years ago when Kabiyesi first muted the idea of installing me, he sent me back midway apparently so that I could go for more tutelage. He sent me to learn about more life. I am better off today. I stand before everybody today and assure you of my readiness to play my role diligently.”

The event was attended by top dignitaries including the President, Major General Muhammadu Buhari (retd.), who was represented by the Minister of Information and Culture, Alhaji Lai Mohammed, at the event.

The  Minister of Interior, Rauf Aregbesola; the Olubadan of Ibadan, Oba Saliu Adetunji, were also present on the occasion. Vice-President Yemi Osinbajo was represented by Babafemi Ojudu.

Femi Otedola : Finally I understood the meaning of true happiness.

BABYMAMAS DON’T HAVE IT EASY SETTLING DOWN – Bisola Aiyeola

MURDER : MY DAD KILLED MY MUM AND NO ONE KNOWS.